In 2014 about 40 people from Middletown, CT went to Sicily to visit the town in which many had roots. This was Melilli high above the sea and a short drive to Siracusa. One day many of us went to the market in Siracusa and that became one of the gastronomical highlights of the trip.  We all made purchases and picknicked in the park.  Yesterday Angela and I went back and recreated some of the highlights of that day. Today The NY Times had an article on Eataly in NYC and how great it was for food and produce. It can not compare to the real thing.

On the left, the green items are pistachios in many forms from chopped, grated and a farina.

This was our first purchase, it came home for dinner. Delicious.

​​
Amazing fresh fruits that have been grown close to us, not thousands of miles away. The peaches were delicious. 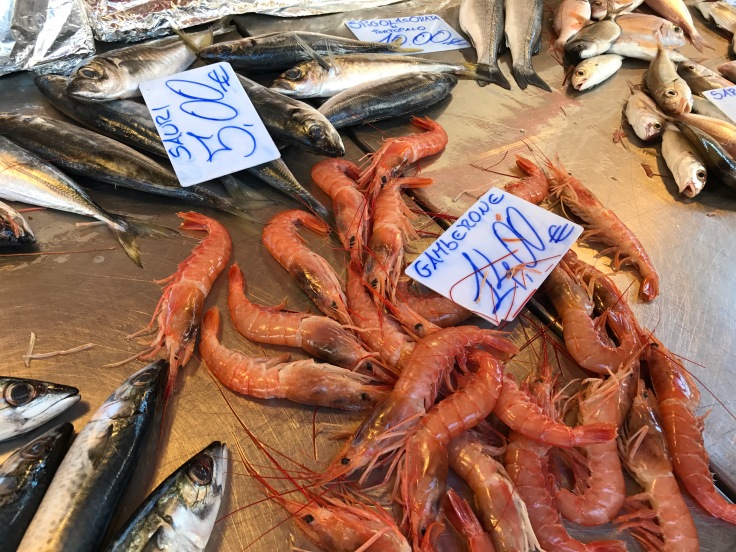 ​​OK there is also some seafood.

Enough about food for now, Later in our trip we will be attempting to visit all the markets in Roma. 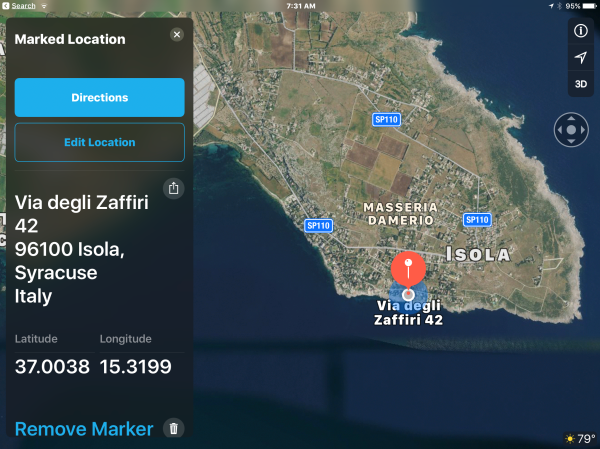 Knowing that we would most likely be in an August heat wave, we have tried to stay  close to the water.

We are about 50 feet above the sea and 50 feet away. The views are stunning. Temps have been in the upper 80s and the sun is intense. Really intense. Fa caldo. 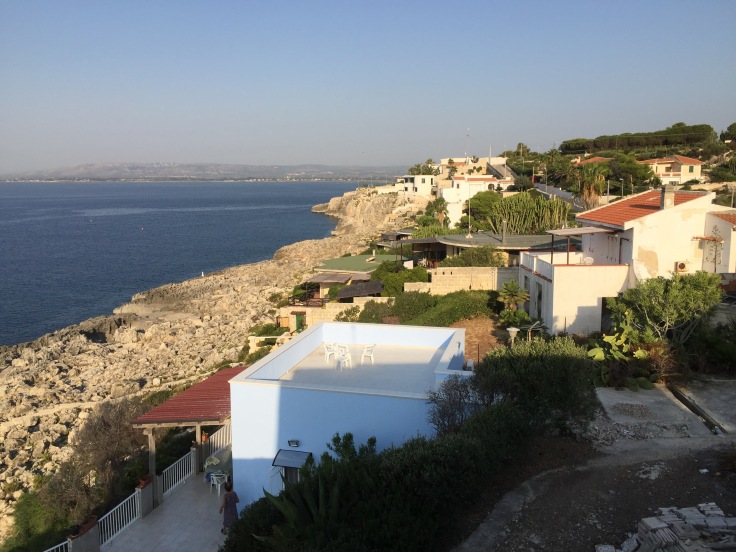 This is the perfect spot for diving and snorkeling. When we were in the water yesterday small fish kept checking out our legs. 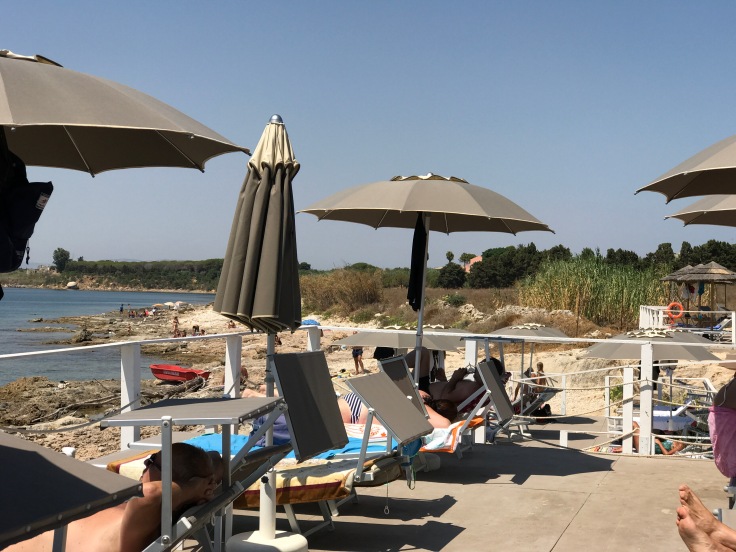 Access to the beach is free, but if you wish the comforts on a lounge chair, and umbrella you must pay. In this case it was 25 euro for the day, and well worth it. Today we will bring an umbrella from our apartment and give it a try on the cheap side. Means no fresh water shower and sitting on the rocky shore on a borrowed towel. We will see. The water is so clear you can see the bottom  in 6 ft depths.  Fish swim by and not plastic or pollution is in evidence. A note about the beach lounge chairs. They are far superior to the ones found in the US. If you wish to lean back, there is a line with a hook that releases the chair to find a comfortable position. What I really like is the folding sun screen to keep the sun our of your face. Wish they were available in Florida.

Some scenes from last night as the sun set.

I love the middle photo my wife took took through the window last night.

Below shows where we are in relation to the town of Siracusa in Sicily.

OK this is to all you seniors out there.  In the past senior discounts were restricted to EU residents.  Recently more places are extending the discounts to everyone.  It never hurts to ask, may not work in the Uffizi or other major attractions. Worked in Castelbuono, and in Tindari both in Sicily.   Text from my UltraLingua dictionary.

I have been driving in Italy since 2001. Each time we go back I forget what is can be like. I have lost mirrors in Palermo and Napoli. Been backed into by a young driver in Agrigento. Twice driven the Amalfi coast which is  a piece of cake compared to driving from Castelbuono to Gangi.  These GPS screenshots do not give you the true picture. For each 180 degree turn, it seems to have been followed by another 180 degree turn. Some times the turn was so tight, that 10 mph was too fast.  We watched as cars crossed the centerline and came at us only to pull back to their side. This definitely was more than I hoped for.
The GSP said the 19 miles would take 1 hour. I took 1.5 hours. The 5 speed transmission only needed three speeds.  That said, Gangi was worth the trip. It is the town  that was selling homes for  1 Euro to attract residents back in. It has been quite successful and many homes have been renovated and more are in progress.  Search The NY Times air the Telegram for more info.
It is high up on a hill and it is a challening drive. But if you can make the trip it is worth it. 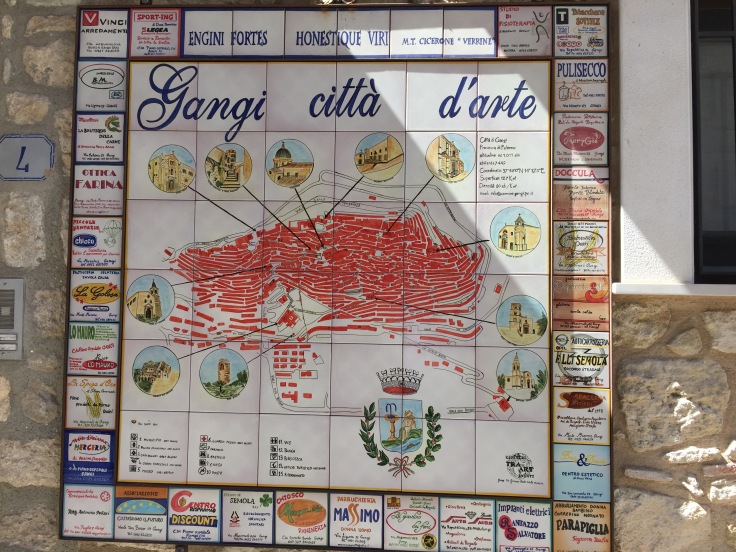 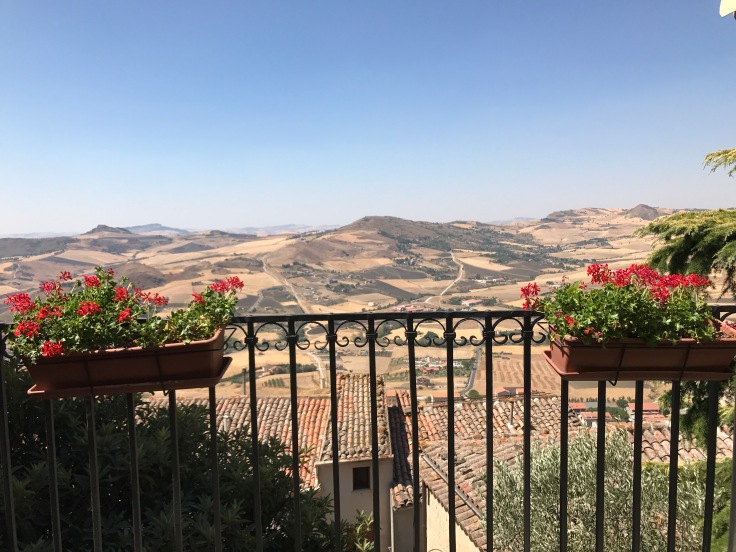 ​​I think you would appreciate this city of art and restoration. 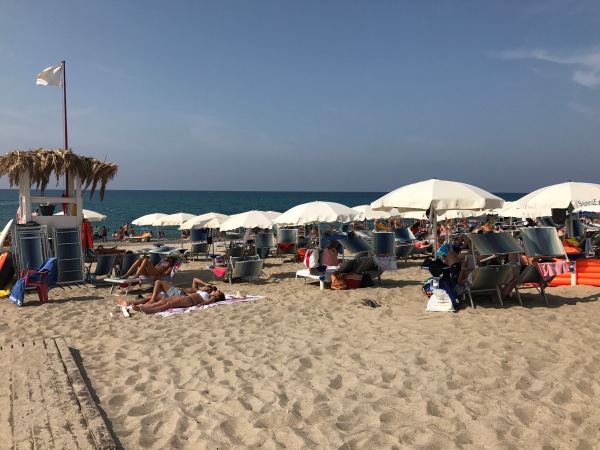 La spiaggia  is where it’s at in August in Sicily. 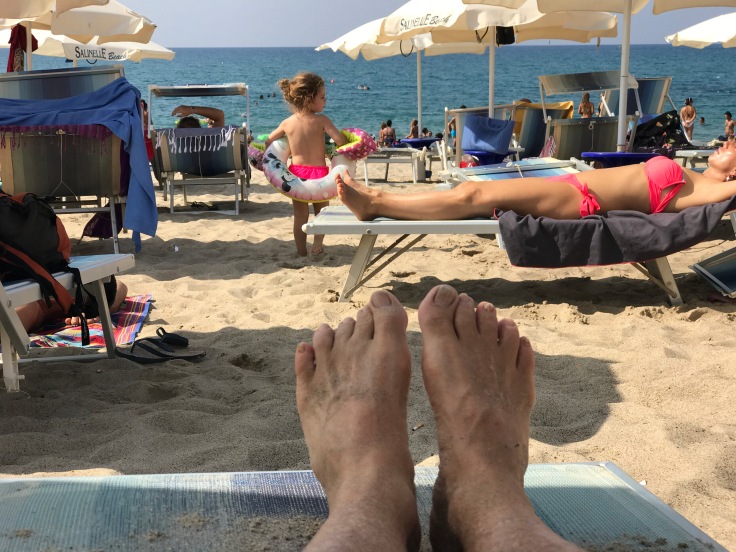 All over the beaches are crowded. There are charges at many beaches for the use of umbrellas and lounge chairs. Fees range from €10-20 depending on weekends or holidays. You have it for the entire day plus use of the WC and the showers. 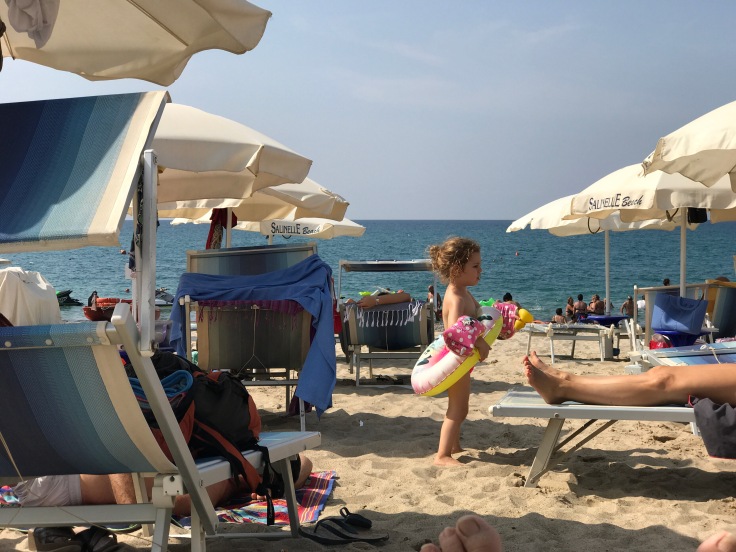 It is also possible to find some beaches with no crowds 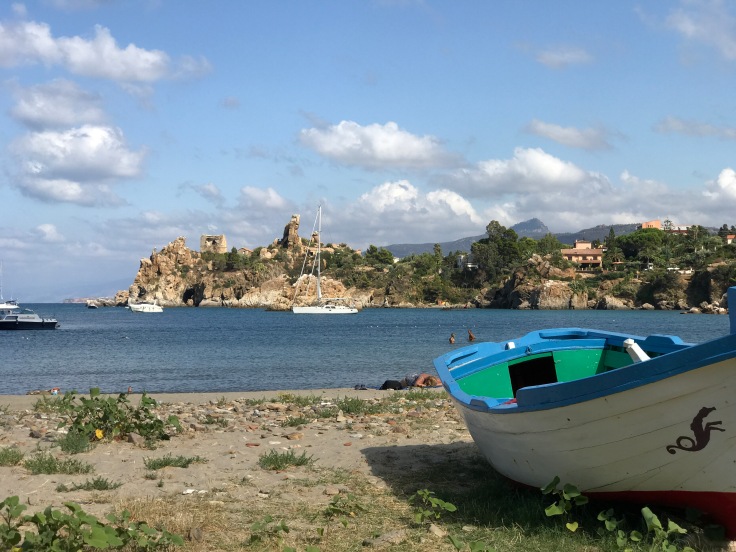 Here we found a beach near the port of Cefalù. There was a bar about 300 meters away where you could use the WC with no charge. The port area is one of the few places you can park and avoid the €14 daily charge. 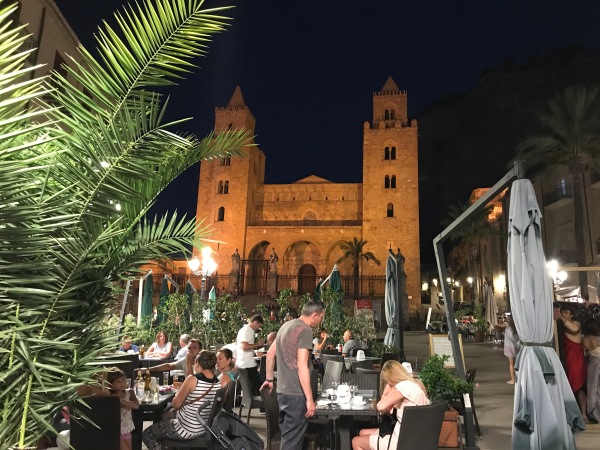 Photos of this amazing cattle city. 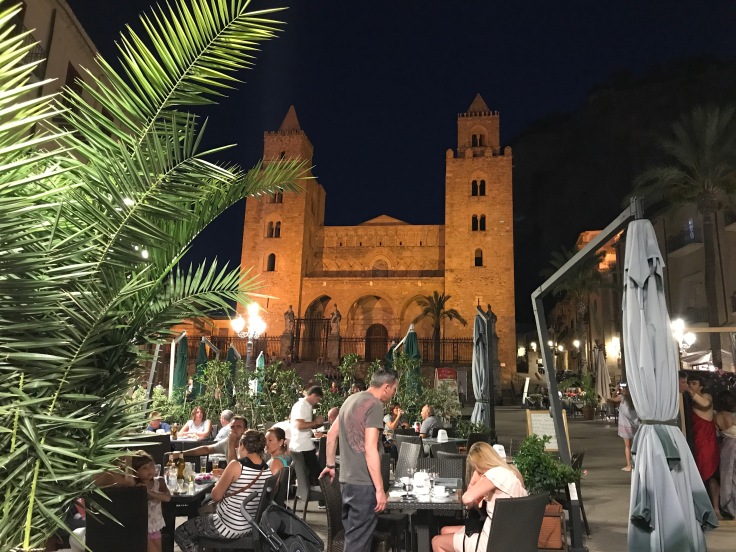 It is a beach town.

The crowds linger after sunset. 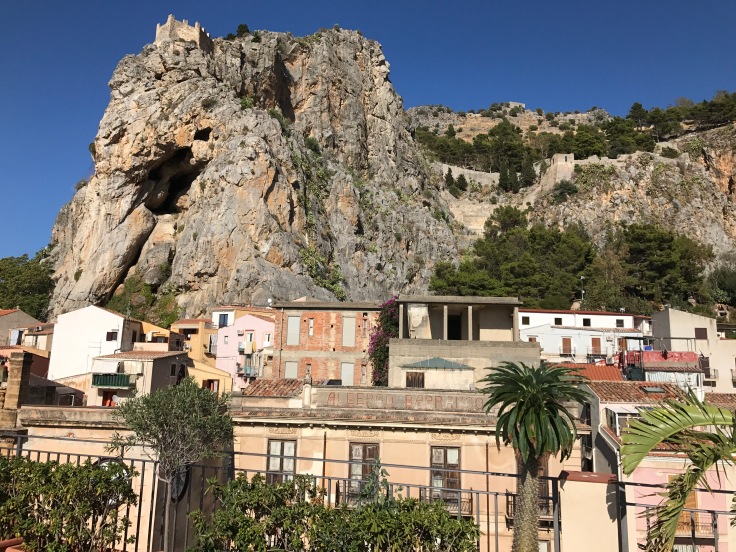 The idea of paying your cell phone carrier a bundle of cash is rediculous.   Have your phone unlocked. If you have met your contract term, go to your carriers site and request an unlock. It will take very little time. You can chuechase GSM phones from Amazon and others for reasonable amounts. I supplement the phone time by using Skype from my 10G data plan. 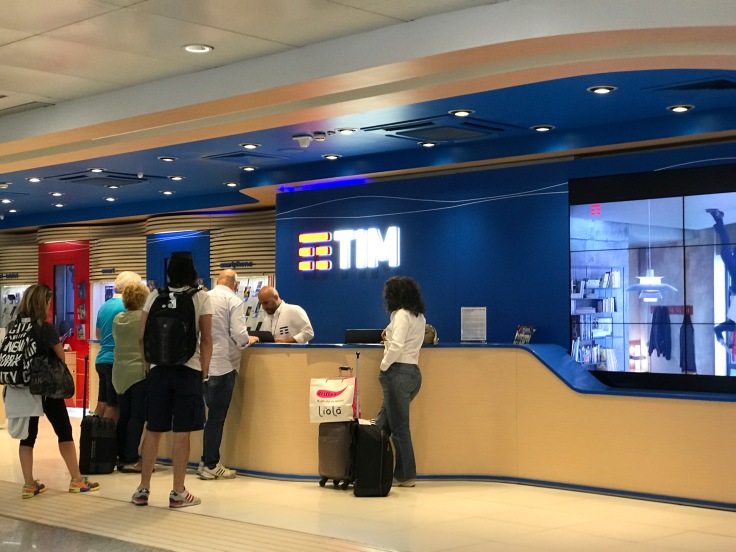 I walked into the TIM store at the Rome Airport  and got a two month plan with 10 gig of tata and 165 min of calls for $42 dolllars US.  The clerk put the new SIM card in, and activated the phone in less than 10 minutes. Up and running with time to spare for my next flight.  For more info Google using a SIM card in Europe or where ever you will be traveling to.   Do some research on your present phone to find out it’s capabilities in other countries.  The iPhone is a good choice and you can purchase a used unlocked iPhone  6 for about $275 from Amazon.   AT&T wants you to use their $10 a day plan for roaming. Not worth it!!!!! 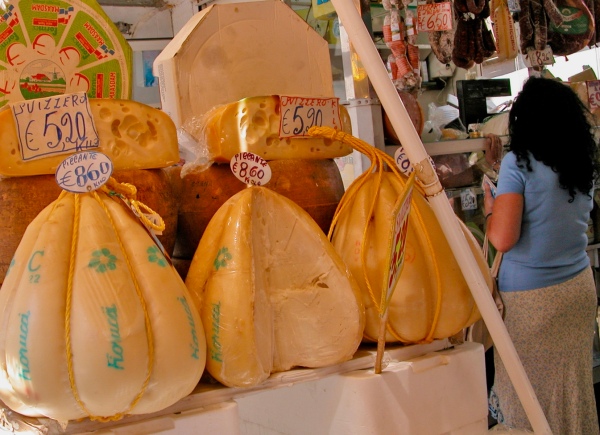 Today we leave for Sicily and Italy. A fifty one day journey that will take us to the Madonie Natural Park, the shores of Lake Garda, and the center of Rome.

Planning has been extensive, but we always depend upon serendipity. Planning is great, but the unexpected is what keeps us going.

Follow along as we travel through the next two months.

My idea of a shoppers heaven.

A view from north of Catania

A closed theater in Siracusa.

A calm stretch of road in Sicily.

Car rental rates have soared in the last several years.  Even using  sites like Kayak and Priceline you tend to get some high rates.  Some time ago I saw a reference in the New York Times to a site called Autoslash.com.   I tried it earlier this summer and was able to get a very reasonable rate for the July 4th week in Hartford, Connecticut.   previously my best rate for the week was about $400. I ended up paying $241 and got the car from Hertz. That was a substantial savings thanks to AutoSlash.

I have booked a 21 day rental in Sicily and did quite a bit of shopping.  I searched Hertz, Auto Europe, and Avis.  Each gave me rates that were in the  $800 range. 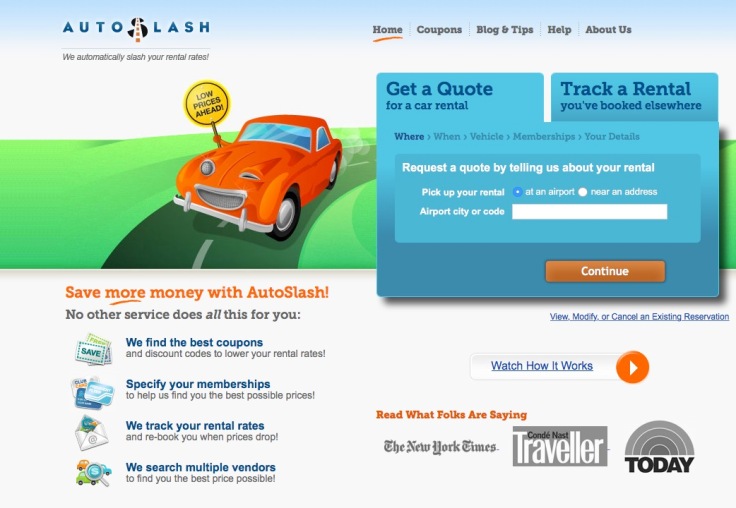 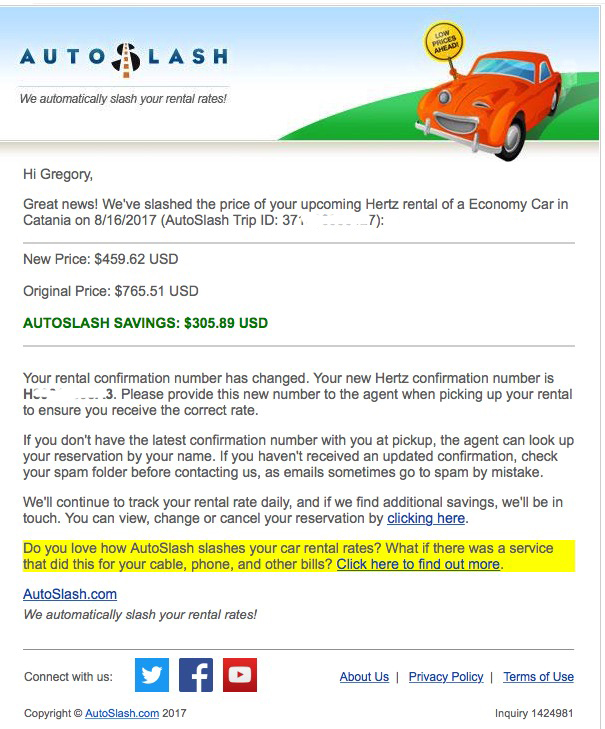 Hertz got down to about $760 and it was looking better. I got a quote from AutoSlash and found that they could get me a $747 rate for the same period and they would continue to search for updates to the rate. Hertz is the provider.

Now  for the really good news! We leave on Tuesday and today I got an email saying they checked rates and it went from $765.51 to $305.89.  This is a substantial savings.  Note the original quote I got was $747 but Hertz raised it. When I brought this to the attention of AutoSlash they contacted Hertz and got the rate reduced.

Give AutoSlash a try and compare with other search engines. Hotwire, Hotels.com, Kayak have been helpful to me in the past, but not have reduced the rates after booking.

You do not pay up front!  Also keep in mind many credit card companies will cover your CDW which can save you several hundred dollars on a rental.

I have no affiliation with any site mentioned above.

Always good to have some tape. In Palermo a driver strayed into my land and hit the mirror. He then continued as if nothing had happened.  Luckily I had some tape and we survived.  I rented with Europcar and got it through InItaly.com.  They covered the damage  but still charged me $100.   That is why credit card CDW is better. BUT read your credit card agreement throughly.

As I casualy drove from Borghese park where I dropped off my wife in Rome to return our rental car in Rome I was oblivious to what was happening around me.

Seems that while I was enjoying the views, I was being watched. As the sights went by and my GPS took me  to the airport traffic cams were doing their job. Enforcing the zona limitato and preparing to send me a multa salata,   A slaty fine which I would have to pay on line.  That was the first and last time I would not be aware of the resident only driving areas in many cities in Italy
As we return to Rome this year, public transport will be our preferred method of getting around.  I must say it was fun driving by the colosseum with out a care in the world, but expensive. 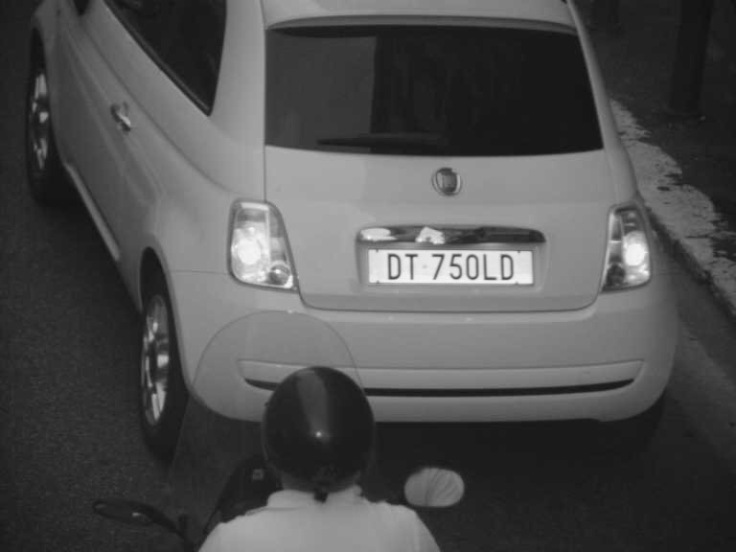